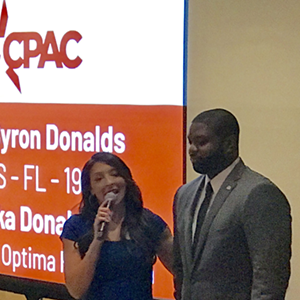 “Parents should be at the lead of deciding where they want their students to get an education.”

A pair of parents who fought for education freedom in Florida brought their advice for success to Texas this week.

U.S. Rep. Byron Donalds (R-FL) and his wife, Erika, spoke to a packed room Thursday during an activist training session at the Conservative Political Action Conference (CPAC) in Dallas.

The couple shared their personal school choice advocacy experiences, which grew out of necessity as they raised three sons with differing educational needs.

“You don’t know that you don’t have a school choice until you need it and it’s not there,” Erika said.

“We didn’t have the disposable income to have full choice,” Byron added. Their journey led Erika to run for their local school board, while Byron ran for the state House.

Byron says the legislature is where key policy changes are decided.

While in state office, he advocated for a school choice bill that required parents to be informed of their options and allowed funds to follow students to the education model selected by their families.

Meanwhile, Erika hoped to make changes from within her local school district.

“I thought the school board might work the same way as a business,” she said.

“At my first meeting, they changed the rules so one member could not get an item on the agenda,” Erika said.

She spent three years of her four-year term getting the board to even consider a proposal for an internal audit. “It took all four years to get that one thing.”

Even as the board attempted to squelch her efforts to improve the district, Erika banded together with other advocates, building support within the community for greater accountability to parents.

“When you get good people in the office, don’t let them die on the vine,” said Byron.

He says school boards are supposed to implement the laws of state legislatures, not “rubber stamp” whatever superintendents say.

“That’s why parents need to get involved,” he explained.

Byron said parents also need to be more organized when advocating for policies.

“We have a lot of passion but not a lot of focus,” he said. “What are your true policy outcomes?”

“Just speaking for your three minutes is not activism,” he added. “You have to organize around what you’re truly trying to accomplish. They’re waiting for you to get tired.”

At the local level, Byron says effective activism involves organizing conservative school board members, having them advocate in the legislature for positive changes, and then staying involved to keep pressure on the board to enact changes.

“You have to show up for them,” he said.

A team of activists to share the work helps maintain energy, he added. “We charge up fast, then quickly dissipate.”

At the state level, Byron advises finding like-minded people in a majority of counties throughout the state.

He also advises advocates to find “thought champions” in the legislature, rally behind them, and get them to build support and momentum at the state level for the changes they want.

“You want members to start talking to each other,” he said. “You need a lot of citizens to show up.”

Erika said when it comes to advocating for specific school choice alternatives, the question is how families can access options.

She pointed to universal education savings account programs just passed in Arizona and West Virginia as good examples, as they eliminate the issue of “gap families” who make too much to qualify for choice plans but not enough to afford private school on their own.

The couple agreed choice plans must be carefully crafted to avoid government intrusion.

“I prefer a market system to a top-down system every day of the week,” Byron said, calling choice programs a “basis to advocate for more freedom.”

Erika has also opened charter schools via her nonprofit Optima Foundation, which is affiliated with Hillsdale College and serves charters teaching a classical education.

She said local officials resisted her efforts to introduce competition to the government system, but the waiting list for her charter school demonstrates families’ desire for alternatives.

“The explosive demand shows how much parents have woken up to what’s going on in public schools,” she said.

“Parents should be at the lead of deciding where they want their students to get an education.”

No comments to show.